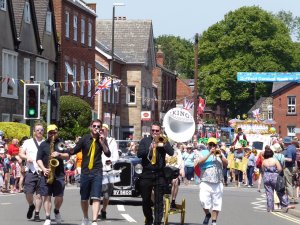 Set in the valley of the River Derwent, five miles north of the City of Derby and on the southern fringe of the Peak District, Duffield has excellent road links, including the A6, and public transport via bus or rail is frequent. Our local authority is Amber Valley Borough Council within the county of Derbyshire; we have had our own Parish Council since 1897 and a Village Community Association (the Duffield Community Association) was formed in 1972. The thriving market town of Belper is situated three miles north of the village.

Local recreational facilities within the village include a thriving tennis and squash club and the Chevin Golf Course. Parish recreational facilities Eyes Meadow and Gray Recreation Ground provide a home for both organised and informal cricket and football teams and many other activities, including a children's play area at Gray Rec, and the popular annual Duffield Carnival at Eyes Meadow. Beautiful countryside on our doorstep includes the Chevin, Bunker's Hill and Quarndon Common. Duffield's Millennium Meadow nature reserve was created in 1999 to mark the new century; it marks the meeting point of the Rivers Ecclesbourne and Derwent and offers a haven for wildlife.

We are home to two primary schools, Duffield Meadows and William Gilbert, and a very successful secondary school, The Ecclesbourne School, which cater very well for the needs of local children.

Duffield is a village with a long history; visitors can take in the remnants of the Castle grounds at the north end of the village, or St Alkmund's Parish Church, which dates from the twelfth century.

The first written record of Duffield is in the Domesday survey of 1085, commissioned by William the Conqueror to catalogue his new realm. Duffield is mentioned under the name 'Duvelle'. There were then probably about 250 people living in the village – quite a significant number compared with about 1,000 in the town of Derby.

The oldest building in the parish is St Alkmund's Parish Church. It was built in stone in the twelfth century near the River Derwent bridge half a mile from the village, on the site of the original Saxon church of wood. Many additions have been made to it, most obviously the tower in the fifteenth century and the spire somewhat later.

Duffield Castle is a remnant of the estate of the de Ferrers family who originally owned the village; however, they lost their local possessions to the king in 1266 and their castle, if it ever was finished, was demolished. The mound with traces of foundations and a well is today administered by the National Trust.

There are several other interesting buildings in the village - Duffield Hall was built in the early seventeenth century and after belonging to various families, a time as a girls' boarding school and a spell as the headquarters of a local building society, has now been returned to its original function as a private residence.

Duffield is the first station on the railway line travelling north out of Derby and by the end of the nineteenth century many managers and chief officers of the Midland Railway Company made homes here. The large houses built then on Castle Hill, Avenue Road, Lime Avenue and Chadfield Road were built with them and their families in mind. Expansion of the village continued with the building of Broadway in 1927, in the 60s with the addition of the Meadows Primary School and housing around this area, and into the 21st century with around 100 houses being added on the site of the old Colour Works factory.

Our most famous past resident must be Ernest Hives (later Lord Hives), who was the major moving force of Rolls Royce from 1936 to 1956. He was responsible for the Merlin engine which powered the Spitfire during World War Two. He is buried at Hazelwood Road Cemetery.