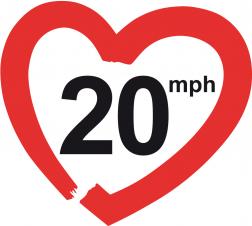 This year's Village Action Plan survey found that 80% of Duffield residents who responded would like to see 20 mph limits on at least some residential streets in the village. 20 mph limits are common across the UK, and indeed Darley Abbey has 20 mph limits. For us in Duffield they will be more difficult because Derbyshire County Council (DCC) has strict criteria before they can be installed, including the need for 6 injury accidents per kilometre of road in the previous 3 years. Only the A6 in Duffield meets that criterion, and 20mph limits aren't possible for a major road of that type.

A campaign is starting to try to persuade DCC to change its policy, and in particular to take greater account of the views of residents. 20 mph limits encourage eco-friendly walking and cycling, they cut noise and unhealthy pollution, and they allow greater independence for children and older people. They produce significant gains in lifestyle and though they initially seem very slow after getting used to 30 mph, they would not in reality greatly change journey times around the village.

Changing DCC policies could involve a long campaign. The Parish Council resolved to support the national 20's Plenty campaign at its Council Meeting on 31st March 2021 and also intends to link with Derbyshire environmental organisations to show that this is not a Duffield-only concern. An early action could be to try to raise a petition of 7500 people, the threshold for a full debate by DCC.

If we can change DCC policy, a further step would be to decide where they might be useful in the village.

There will be lots of things to organise, but it should be enjoyable and fulfilling. If you are prepared to join a group to fight for 20 mph limits, please contact John Shoesmith at j.shoesmith@duffieldparishcouncil.gov.uk